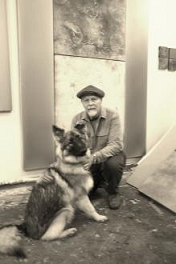 Dale was born and raised in Minnesota from a working class family with six brothers and one sister. He was the first of his family to go on to college. He started his secondary education at North Hennepin College in 1969. He quickly became enthralled with the Art department and decided that he wanted to become (with some misgivings from his family) an artist. He moved onto St. Cloud State University in central Minnesota studying with a second generation Abstract Expressionist, David Brown, where he received his Bachelors and Master Degrees in Art, in Painting and Drawing with High Honors. 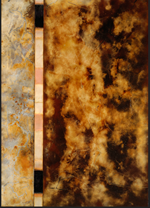 St Cloud State University in 1975 provided Dale with his first opportunity to teach Art as a Teacher’s Assistant. Loving the experience, he decided to make it a career. He taught at the Minneapolis College of Art and Design in Minneapolis, Minnesota and at Dakota State College in Madison, South Dakota before receiving a Ford Foundation scholarship to attend the University of Washington. Moving out to the West Coast, he received his Master of Fine Arts degree in Painting in 1982.

Loving the Seattle area, Dale decided with his wife Abby, to make it permanently their home and have had the joy of raising two astonishing children in the Pacific Northwest. Dale secured a studio in 1982 in Seattle’s historic Pioneer Square, which he kept for the next 20 years and has been an active member of Seattle’s growing Art scene.  He has been represented by several local galleries and had several one-person exhibitions, including the Francine Seders and Grover/Thurston galleries, Foster/White Gallery, ( http://www.preview-art.com/previews/11-2006/lindman.html, http://www.fosterwhite.com/dynamic/artist.asp?ArtistID=95 ) and in Santa Fe, New Mexico by the Darnell Fine Art Gallery ( http://www.darnellfineart.com/Lindman/index.php ).

Dale’s work is included in many prominent private and public collections including; the Microsoft Corporation, Neiman – Marcus Corporate Headquarters/Dallas, TX, Nordstrom Corporation, Boeing Corporate Headquarters/Chicago, Il, Safeco Insurance and Seattle’s Swedish Hospital. Dale’s work has been reviewed in Art News and in several of Seattle’s local papers, and his work has been featured in Southern Accents and Seattle Homes magazines and in two full-length films. 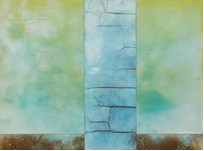 Dale began teaching part-time at BC in 1993 and is currently a full-time Instructor, teaching drawing, design and painting.   http://www.dalelindman.com/Artist.asp?ArtistID=30327&Akey=PRGJQ8CG