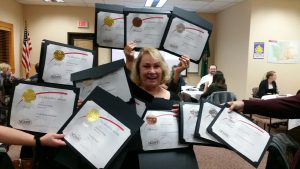 Sharon Berg, BC’s Publications & Communications Manager, represented the team at the region conference in Walla Walla in October. “I could hardly sit down before being called back to receive another award,” said Berg, “NCMPR Region 7 has a very supportive and creative group of members and they were very excited for us and came up with the idea for the photo. Since I only have two hands and there were 12 awards, they donated the use of their arms to get them all displayed in the photo.”