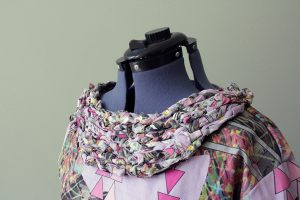 Visit the Seattle Art Museum and you can see the powerful Project 42, a multidisciplinary work by Bellevue College assistant professor Molly Jae Vaughan that honors transgender lives lost to violence. The exhibit, which runs through Aug. 5, also raises awareness of the shorter life expectancy of trans individuals.

Each work begins as a personalized garment designed by Vaughan to memorialize the life of a trans individual who was murdered in the U.S. Google Earth screenshots of murder locations are used to create abstract textile prints. The prints are then sewn into a garment that is worn by a performer who incorporates dance or some other action to memorialize and rehumanize the life that was lost.

“When a trans individual is murdered, they’re first dehumanized by the act of violence, and then further dehumanized by media that tends to emphasize their transness, rather than their unique personhood,” said Vaughan. “The project acts to redirect attention to their humanity, and also raise awareness of the violence, or threat of violence, transgender individuals face.”

Project 42 is a collaboration that challenges attendees to step past the headline, explore their own comfort levels, and face biases.

“It’s been a learning process for me, too,” said Vaughan. “I began this through personal research into the trans community in the early stages of my transition. I wanted to know what types of barriers other trans individuals faced, what kinds of misunderstandings are out there, how I could reach people and get them past this abstract, surface-level view to something deeper. The colors are attractive and accessible. What the patterns represent, and the performance, offer an emotional impact.”

Project 42 began in 2012 and has received funding from The Pollination Project, National Performance Network and Visual Artist Network (Art Burst Grant), and Art Matters. Performances with the garments have taken place at the Harvey Milk Festival in Sarasota, Florida, the Minnesota Museum of American Art in St. Paul, Minnesota, and the Henry Art Gallery in Seattle.

In November, the project won the prestigious 2017 Betty Bowen Award. Rather than speak about her work at the award ceremony, Vaughan used the opportunity to memorialize the life of Fred Martinez Jr., a transgender teenager of Navajo heritage who was murdered in Colorado in 2001. BC English professor Natalie Ann Martinez dedicated a poem to Martinez that was embroidered in the fabric of the memorial garment. The accompanying performance included rituals by collaborators with Native American heritage.

“We’ve become desensitized to violence, and violence against the trans community in particular,” said Vaughan. “Project 42 is an opportunity to share space with that life that was lost, engage with each other, and elevate the discussion. I feel really humbled to be a part of it.”

For the past three years, the artist has also been an integral part of the Bellevue College Art Department as an assistant professor, teaching classes in drawing, painting, two-dimensional design, printmaking and color theory. Vaughan holds a Bachelor of Fine Arts from the School of Visual Arts in New York City and a Master of Fine Arts from the University of South Florida in Tampa.