Sparking an Interest in Science and Engineering

Hundreds turned out for the Central Sound Regional Science and Engineering Fair at Bellevue College, an annual competition that judges science and engineering projects created by ninth- through 12th-grade students in King and Snohomish counties. 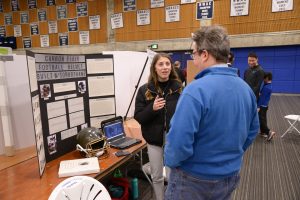 The fair encourages innovative student research and provides professional scientists and engineers the chance to interact with some of the best and brightest young students in the greater Seattle/Everett region. The competition is affiliated with the Intel International Science and Engineering Fair, or ISEF. Winners with the top two projects will receive an all-expense-paid trip to ISEF in Pittsburgh and become part of the Washington state delegation of science fair champions.

This year, 19 schools participated and 233 students presented projects at the event in March.

“We were very excited to see what students came up with,” said Jennifer Pritchard, program manager for Bellevue College’s Science and Math Institute. “We’ve had some amazing machine learning projects in the last couple of years. One of our previous winners used videos to help determine cardiovascular health and identity verification. This generation of innovators is also very concerned with the future of energy, so we knew there would be a number of projects that involved wind, solar or biofuels.”

The grand champion was Ronit Jain from Interlake High School. His project was called “Next Generation Morphological and Molecular Analysis of the Toxicity of Pharmaceutical-Derived Aquatic Contaminants (PPCPs).” The project that won first runner-up was also from Interlake High School. Veenadhari Kollipara’s project was titled “Farming from the Sky: Design, Fabrication and Testing of a Smart Precision Agriculture End-to-End System to Boost Global Food Security and Environmental Sustainability.”

The Science and Math Institute is the science outreach office at Bellevue College. It serves the community by developing and leading engaging, innovative science and math programs, primarily for middle and high school students.

Part of that mission is to foster interest among communities typically underrepresented in STEM fields. Approximately 50 percent of competitors are female, and the event recognizes creative projects in each category from first-time fair participants, rewarding innovation rather than access to resources.

Jennifer Pang, a director in the college’s Science Division, said, “When we create opportunities to inspire scientific discovery and think critically, we encourage our community to connect to science in their everyday lives and consider the importance and impact of science- and math-related careers.