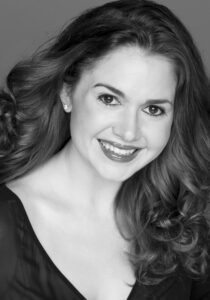 Originally from Austin, Texas, Sara earned her Bachelor of Music degree in Classical Vocal Performance from Rice University, followed by a Master of Music in Classical Vocal Performance from the University of Houston. As a performer, Sara has combined her exceptional vocal technique and alluring stage presence to delight audiences in such roles as Fiorilla (Il turco in Italia), Jouvenot (Adriana Lecouvreur), and Despina (Così fan tutte). A gifted instructor, Sara created her own voice studio in 2004. She continued private voice instruction upon moving to the Seattle area, where she has been an influential member of the music education community since 2007. Sara joined the faculty at the Digipen Institute of Technology in 2016 as the professor of vocal studies. She has also collaborated many times with the award-winning Lake Washington High School choir department, including credits as musical director for several of the school’s productions, such as The Music Man, Grease, and The 25th Annual Putnam County Spelling Bee. Sara is an active member and has served as an officer and board member of the Puget Sound regional chapter of the National Association of Teachers of Singing. In her spare time, Sara enjoys traveling with her husband and watching baseball.