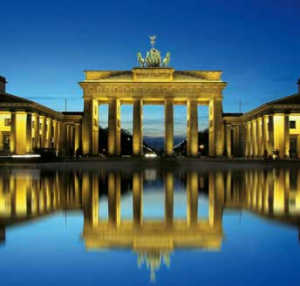 This is a WCCCSA program. For how to start the application, please refer to “How to Apply” page.

ATTENTION: Due to the COVID-19 global pandemic, Bellevue College has a travel ban in place suspending all trips with credit-bearing purposes. This travel ban applies to all WCCCSA study abroad programs. Program information is posted for reference only and please reach out to the WCCCSA Study Abroad Coordinator, Li Liu at li.liu@bellevuecollege.edu to verify program status if you are interested to apply.

Students will enroll for 15 credits to include the mandatory German Life and Culture course taught by a local guest lecturer, focusing on historical, political, economic and cultural aspects of Berlin and Germany. The other two courses ( 10 credits total) will be taught by a Washington community college faculty who travels with the group to Berlin.

Your program fee doesn’t include

Ben Kohn’s scholarly training and personal enthusiasms have resulted in his applying an interdisciplinary approach to all of his courses. So you can expect a discussion of painting in his music class and a discussion of architecture in his film class! Ben pursued his graduate studies at the University of Washington in the field of Comparative Literature, with an emphasis in German, American, Russian, and Danish Literature, as well as literary and critical theory. He also studied the classical violin for over 20 years, receiving training at The Vancouver Academy of Music, Vancouver, B.C., Canada, and Det Fynske Musikkonservatorium, Odense, Denmark. He is currently a professor in the Department of Visual and Performing Arts and the Department of World Languages at Whatcom Community College, where he teaches humanities, interdisciplinary studies, music, film studies, and German language courses. His most recent research interests include human evolution and the origins of symbolic representation, German Expressionist everything, the art of propaganda, bird song in science, literature and music, and perfecting his version of Schwarzwälder Kirschtorte. Ben has previously taught for WCCCSA in Florence, Italy, and Berlin, Germany. He is looking forward to building on his previous experience through new additions to an already dynamic program studying Berlin’s rich musical and cinematic traditions, as well as the city’s cutting edge contemporary scenes. As a student, Ben attended study abroad programs in Germany, Austria, France, and the former Soviet Union, so he recognizes that such cultural experiences offer the possibility of great intellectual and personal transformation. Ben’s explorations with his students will provide many opportunities for such transformations.

Next to Hollywood, Germany has been home to one of the most influential and important film industries in the world. Indeed, during the 1920s and early 1930s, it was the undisputed center of cinematic creativity and quality. At the center of this center was Berlin, or more specifically, a studio on the outskirts of Berlin in Babelsberg. Babelsberg was a government-supported studio complex (which we will visit!) that was designed to advance German filmmaking before and during WWII and East German filmmaking after the war. While German filmmakers developed numerous technical innovations here, their most essential achievement was the development of cinema as an art, transcending its role as a provider of novelty and entertainment. As we will be examining film as art, we can easily use German films and film clips almost exclusively to illustrate in detail the technical elements of film (form, narrative structure, mise-en-scène, cinematography, editing, sound), as well as investigate how films can make us see, then feel and think differently.

Additionally, films often reveal aspects of national or regional culture and can also reflect back to us certain situations around certain moments in time (Zeitgeist!). They most definitely present how filmmakers see their own culture and how they want us to see their own culture. Thus, they can provide us with great insight into the historical and contemporary culture of Germany and in particular the city of Berlin. The films that we will see in their entirety, and the films which you will be required to analyze in detail, will all be by German directors. They will cover several genres and will even include an East German Western infused by communist ideology. Guess who rides off into the sunset!

Which composer got into a knife fight with a bassoonist because he played too many wrong notes? Which composer spent 3 ½ years on tour starting at the age of seven? Which composer’s final work was dictated to him by angelic-voiced spirits? Which composer considered his audience a congregation and started the practice of extinguishing the lights in theaters and concert halls? Which composer wrote songs extolling the virtues of gangsters (no, not Snoop Dogg!) that have been performed in both the most gilded opera houses and the sleaziest bars? These colorful characters were J.S. Bach, W.A. Mozart, Robert Schumann, Richard Wagner, and Kurt Weill – all of whom were German-speaking composers with close connections to Berlin!

This course will explore the extremely varied and rich history of Western art or composed music, popularly and somewhat inaccurately (our first discussion!) referred to as the “Western Classical Tradition.” Because we are lucky enough to be situated in Berlin, we will focus most intensely on the musical contributions of the composers and performers of this region. Actually, this would probably be the case if you were to take an introductory musicology course anywhere in the world, especially if you were discussing the music of the 19th, 20th or 21st centuries. What is even more exciting is that we will be in the most musically innovative, dynamic, and vibrant city on the face of the planet at the very moment it is exploding with all kinds of new sounds! As genre boundaries are constantly being blurred in this contemporary music, we will necessarily undertake some Jazz and World Music studies, as well as some informal investigations of House, Techno, and Trance sounds. I will arrange for the class to attend numerous concerts of music throughout the quarter. All of these concerts will be preceded by scholarly preparation and will require the writing of musical reviews after the performance. Therefore, while the course will be much more about music as a socio-cultural phenomenon throughout history than a course on music theory, you will be required to become familiar with some critical vocabulary and basic elements of this music for the purposes of analysis. But do not despair – Berlin offers the possibility of becoming profoundly educated in matters of music while at the same time having a lot of fun!

As a Latin American diaspora and partnered with an Austrian, traveling abroad has become an intimate part of her life. In her late teens Vero spent over two years travelling in the Southern cone and became intrigued with how gender production and presentation is shaped by the cultural, economic, and social context of place. the questions she asked then continue to shape her research, film-making, teaching, and activist life. Vero earned her Bachelor of Arts from the Evergreen State Colelge where she found her passion for interdisciplinary studies and film-making. she received her MA in Human Development form Pacific Oaks College where she produced her first documentary film on Latin-x immigrants in higher education. she then earned a Masters in communication from the University of Washington in the Native Voices Documentary Film Program and did doctoral work in Feminist Studies in the Gender, Women and Sexuality Studies Department. while pursuing her PhD she traveled to Chile to conduct research with human rights activities and produced a documentary film about memory, gender and human rights. she is currently a tenured instructor at Seattle Central College in the Humanities Department.

The history of Germany is troubled and can shape the relationship between communication and cultural practice in ways we are unable to see without some skill and analysis. Speaking to each other across cultural practice, shaped by social dynamics and histories is the focus of our class. Using an interdisciplinary lens, we will look at the social, cultural and economic issues that surround the intricate relationship between communication and cultural practice in order to see how race, class and gender interact with cultural forms of communication in the context of our changing world, particularly globalization, new technologies, and global economic crisis. We will use Berlin as a backdrop to explore the ways the histories of the Holocaust and its aftermath shape the ways we perceive the city and examine the cultural and social context of memory and reckoning of the German people.

Does gender get presented and produced differently in Berlin, Germany than in the U.S.? Of course it does, but how do we interpret it and use it to analyze and reflect on our gender, sex, and sexuality? How we see and live our lives is fundamentally shaped and organized along gender lines. We are rarely made aware of that shaping and less so the way it arranges our daily lives. Yet, many of us begin our day by “doing gender” and move about our day repeating those gendered acts and practices; shaving your legs or your face, putting on cologne or perfume, eating nonfat foods or a protein shake, wearing skirts or pants, etc. This class will introduce you to gender, women and sexuality studies, an interdisciplinary academic field, and its respective theories, methods and frameworks. The way we analyze gender, women, and sexuality emerges from many disciplines working together that allows for a multidimensional view of human experience. We will start our work with the understanding that there is no genetic nor universal category of woman or man. Rather, that knowledge, history, policies, and norms are produced, shaped, mediated, and governed to construct gender in particular ways. We will also explore the ways gender and sexuality are tied up with and inseparable from other social locations, such as race, disability, age, ethnicity, citizenship, and class.