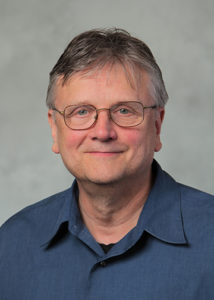 Prior to teaching at Bellevue College Bruce Wolcott  has many years of experience in various aspects of commercial media production. Early in his career, he studied motion picture production in Rome, Italy and worked was involved with multi-image production in New York City. After completing his B.A. at The Evergreen State College in multimedia and human perception, he served as media production coordinator for the Pacific Science Center in Seattle, and later as a visual effects designer and creator, for a wide range of Seattle-area clients.

Since 1998, while teaching at Bellevue College, he’s completed web-related projects for the National Workforce Center for Emerging Technologies, Harcourt Brace Publishers, Thomson Publishing, and the civic organization, the Seattle Independent Media Coalition. His current interests are in collaborative Web-based learning environments, and exploring the application of real-time interactive computer simulations and games for learning. At Bellevue Community College he’s taught classes in Web Multimedia Foundations, Digital Imaging, Exploring the Digital Future, Digital Design and Storytelling, History of Animation, Technology of Persuasion, Computer and Internet Foundations, Game Theory, Media and Messages, and Visual Storytelling, and Writing for the World Wide Web. From 2010-2012, he taught a hybrid online course called the Fundamentals of Interactive Entertainment for the Human Interface Technology Lab at the University of Tasmania.

In 2012 he completed a nine month certification program for teaching in Virtual Worlds, sponsored by the Information School at the University of Washington, and an E-Learning for Educators certificate at Bellevue College.

Most recently, Bruce has been working with the Bellevue College eLearning Center as an online instructor and faculty advisor. He’s been working with the eLearning Center to develop the newly created XR Lab, dedicated to the use of virtual reality technologies for teaching and learning. As part of the XR Lab mission, he teaches a Communication Studies sponsored course called “Virtual Reality: Design and Communications”.