Ideas To Reduce Your Environmental Impact This Fourth of July! 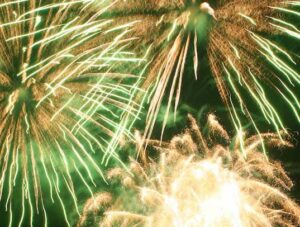 4th of July is near! The Office of Sustainability would like to remind our students and staff about the environmental impacts of 4th of July festivities. This year fireworks are expected to exceed $675 million in total sales.

Fireworks release dangerous toxins into soil and water; scientists are only beginning to find out the health consequences of these chemicals on human health. Studies have shown perchlorate levels in nearby soil and waterways and wells rose dramatically after the 4th. Fireworks are often made with excessive amounts of cardboard, paper, and plastics which often aren’t disposed of properly.

Fueling the flight of fireworks, gunpowder and metallic compounds create the stunning colorful displays we enjoy each Independence Day. These compounds pose significant health hazards to animals and humans alike, as most contain carcinogenic or hormone-disrupting substances that seep into soil and flow into water streams.

In an excerpt from his article on Mother Nature Network, an environmental website, Russell McLendon explained the environmental impacts of different firework colors:

In addition to gunpowder, fireworks are packed with heavy metals and other toxins that produce their sparkling shower of colors. Like perchlorates, the exact effect of fireworks’ heavy-metal fallout is still mainly a mystery, but scientists do know that the metals themselves can wreak havoc in the human body:

Aside from the dangerous toxins spread through the fireworks, 4th of July is one of the year’s biggest waste creators. Consider some of these ideas for simple ways to reduce your footprint at these years’ festivities without sacrificing an ounce of fun!

1. Go Meatless for the Day

Nothing says 4th of July like a backyard barbecue but the global meat industry has put a terrible strain on the planet. So this year, why not ditch the pork chops and steaks and consider some delicious vegetarian grilling recipes instead. Although ditching the meat might seem akin to sacrilege, there are so many more creative dishes available that are good for your health and the planet.

When you have 15 guests coming around, it’s so easy to break out the paper plates to avoid a sink full of dishes, but imagine the waste if every American went this route. This year, if washing your own dishes in a water-saving dishwasher doesn’t sound appealing, it is now possible to purchase biodegradable packaging that won’t clog up in the land fill.

Using public transportation or even cycling instead of driving your own car has more than one benefit: not only will you reduce your carbon footprint for the day, but you won’t have to drive home after drinking or a tired night!

Instead of buying a stack of cans and bottles that use up a lot of unnecessary materials, consider purchasing a keg instead. This is cheaper, usually, and you’ll have zero waste – especially if you use your own mugs or compostable Ingeo corn cups. Avoid bottled water and soda to reduce waste, and buy soda in bulk!

By taking these tips into account this 4th of July, you are helping to reduce our strain on our planets ecological systems and are creating a better environment for future generations!