Science is built up with facts as a house is with stones. But a collection of facts is no more a science than a heap of stones is a house. Henri Poincaré 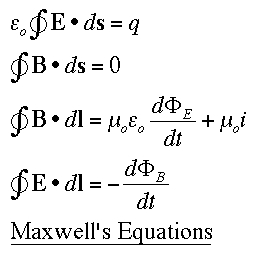 Physics is the study of the interactions between physical systems. The physicist attempts to describe the interaction with the most fundamental and general law or principle possible. As an example James Clerk Maxwell summarized all of classical electromagnetic theory into four simple equations; Maxwell’s Equations. With these relations one can understand such diverse phenomena as electric power generation, the refrigerator magnet that holds up your shopping list, the bonding of chemical elements, and why a balloon will stick to the ceiling after it has been rubbed on your sweater. Nature is complex and beautiful. To the physicist this beauty is enriched when we perceive the underlying simplicity of physical laws. Achieving this understanding is very difficult in the face of the complex interactions that take place around us each day. The physicist begins with the simplest systems that she or he can identify. The history of Maxwell’s insight illustrates how the physics community works from simple isolated systems toward a fundamental and general law (or set of laws).

All electrical phenomena involve the interaction between positive and negative charges. The earliest studies began by isolating positive and negative objects and observing their interactions. Charles Augustin de Coulomb (and others) performed these experiments. His results were rewritten in a particularly powerful form by the great mathematician Karl Friedrich Gauss. Hans Christian Oersted was the first to report a connection between magnetism and electricity when he noticed that a wire carrying an electric current disturbed the needle of a nearby compass. André Marie Ampére and others described how electric currents can create magnetic effects and Michael Faraday showed that changing magnetic phenomena creates electrical phenomena. This increasingly complex understanding was built at each step on relatively simple experiments or observations. With the addition of a single term to Ampére’s Law, Maxwell recognized that all classical electromagnetic effects were described by the four equations he compiled. 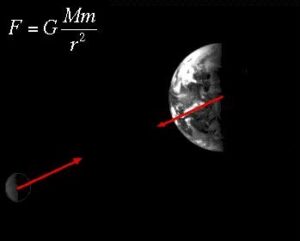 is often mentioned as the person who made the greatest contribution to physics. It is easy to understand why he receives this distinction. Newton was the first to describe a fundamental force of nature mathematically. Not satisfied that his arguments were sound, Newton invented the calculus to help calculate the gravitational force of the Earth on the Moon.

Being the first to find a truly fundamental and universal law of nature would have insured his reputation. However Newton’s contribution was deeper than this. The basic relationship between causes (forces) and effects (motion) was not established in Newton’s time. More than four thousand years of debate among natural philosophers had not resolved this fundamental issue. Newton demonstrated that force produces acceleration (not velocity!). In his famous Principia Mathematica Newton solved the problem of the Moon’s motion around the Earth. His reasoning extended from the fundamental force law all the way to the resulting motion, with both crucial links devised by him. This was a compelling achievement. More than this, it established a model for all physicists to follow.

These two pieces of the history of physics serve well to illustrate the spirit and essence of physics. Some part of the physical world draws our attention. As we seek to understand it we must first tease away the distracting elements. If we succeed by stages to reach a truly fundamental understanding, all of the secrets of the original complex phenomena should become clear to us. Of course science, like life, is rarely this easy. The process of discovery is ongoing. To appreciate the central problem of physics today one final piece of history sets the stage.

In 1949 Richard Feynman put the finishing touches on Quantum Electro-Dynamics (QED). In one theory Feynman had united Quantum Mechanics, Relativity, and Electromagnetism (viewed as a single force since Maxwell’s time). QED is the single most accurate predictor that science has devised and in one step it has removed electromagnetics as a research field in physics because it is now completely understood (at least in principle).

By the middle of this century physics had discovered that four fundamental forces were responsible for all of the interactions in nature that we could perceive. These were the Strong and the Weak nuclear forces, the Electromagnetic force (now described by QED), and Newton’s gravitational force. Between 1966 and 1968 Stevan Weinberg and Abdus Salam brought the Weak Nuclear force and the Electromagnetic Force together and described them as a single type of interaction (called the Electroweak force). This great success in unifying separate fundamental interactions in a single theory established the theme for modern physics.

The answer is that we are stuck. Many clever proposals have been made since QED was published. In each case our understanding of some phenomena has improved. But each theory has proved unsatisfactory in some way. The search has produced the theory of the Big Bang, Lasers, the transistor, computers, and the World Wide Web. All are direct products of QED and the subsequent search for a Unified Field Theory. We’re still working on it.

Sticking to the central theme brings us to the end of the story quickly, but of course many interesting and exciting parts get left out. Finding the underlying law is like finding the architects plan for the house. Having natures plan helps us devise tools to increase our understanding. But having the plans and the tools will not by itself build the house. You must also gather the stones.

Considerable research took place between Maxwell’s publication and the invention of radio. With radio reception we are able to gather data about stars and galaxies that were invisible before. Pulsars (rapidly spinning neutron stars) were discovered in 1968 by Jocelyn Bell Burnell”. Another part of the electromagnetic spectrum, X-Rays, gives us the signature of black holes. But X-Rays can also let us look into the human body or determine the structure of crystals. The structure of DNA was deduced by Rosalind Franklin from a crystallized sample in just this way. As another example, we understand the Strong Nuclear Force, but the detailed structure of the nucleus is still an active research area. And one of the early experimental tools in this research was Nuclear Magnetic Resonance. This phenomena, exhibited by all atoms, is at the heart of every Magnetic Resonance Imaging (MRI) exam in our hospitals. Because of its ability to show soft tissue structure MRI has been a powerful tool in biological research.

Even building the mathematical tools has led to remarkable technologies. An early difficult mathematical problem in the field of Nuclear and Particle Physics was the Inverse Scattering Problem. The Inverse Scattering Problem is to deduce the structure of any object (in this case the nucleus) by reconstructing the history of scattered waves. The solution of this famous problem led directly to the development of devices used for oil exploration and earthquake prediction by deducing the geologic structure of the earth. This technology is also built into the computer that analyzes every diagnostic ultrasound exam.

The field of physics lies behind all of our technology. No brief summary could do justice to the topic. As you study physics do not become too distracted by the pretty stones you find. (Also do not become discouraged if you trip over a few.) Remember you want to see the entire house.

Our door is open. Welcome.