From an alumni and a parent

Leaver, a third-year student, is a participant in Bellevue’s Neurodiversity Navigators program, which supports students with a variety of cognitive differences. A classically trained violinist, Leaver was hoping to transfer to a four-year university with a strong music program after completing her associate’s degree. But when COVID-19 struck in Washington, Leaver’s home state, and then the country, her plans were derailed.

“If I didn’t have the training and self-advocacy that I’ve accumulated over the past two years… I would be floundering,” she says. “I would have fallen behind and never caught back up.” — (BC Alumni Abby Leaver)

Leaver sees this moment, in a year marked by social upheaval, as an opportunity to reframe public perceptions of neurodiversity. Autism isn’t a medical issue, she believes; rather, it’s a social-justice issue that’s been “co-opted by the medical system.” She urges people to abandon medical language and “normative assumptions” when they think about autism and focus on individuality.

CNN Growing Up Autistic: My Story

“The college I attend has a program specifically created for students with autism and Asperger’s, which helps them learn their strengths and weaknesses and how to advocate for themselves. I have learned what my needs are and how to ask for help, even though at times I wanted to give up. I have always been given the help I needed when I asked.” — (BC Alumni Trevor Pacelli)

“I lost 14 years of my life to just nothing,” Gibson said about all of his previously failed attempts at higher education, a time period in which he didn’t really grow in any way.

Gibson likened high school to a tricycle and college to a bicycle. There is no in-between or training wheels period. For him, NdN is the training wheels.

“You’re not entirely on your own,” Gibson said.

I asked both Gibson and Leaver what advice they had for BC students who are on the spectrum, regarding the program. While they acknowledged that not everyone may need NdN, they both encouraged students to at least reach out because the staff are good people to connect with and will advocate for you whether you’re in the program or not.

Gibson said no student on the autism spectrum should go straight from high school to a four-year college or university. He said students should “get something in between.”

“It’s kind of hard without that,” he said.

Anon: The ASN support for me to get my AA degree was amazing. I don’t think I would have made it this far without this program. I’m very grateful for this support, thank you. The group meetings for this quarter were helpful and reassuring. I don’t think any changes are needed. The parts that worked well for me was that an NA was always available for me, despite how busy they were tending to the entire group.

Today, I went running in the rain for the first time. Unsurprisingly, it sucked. My clothes are now soaked, and I spent most of the run kicking myself for deciding to go out in the first place. I even considered just going running some other time, which — if you know how incredibly stubborn I am — tells you just how bad it was.

But then something unexpected and wonderful happened: the sun came out. And it made me realize that that was what life was about sometimes. Sometimes you have to do things you don’t want to do. But eventually, no matter how long it takes or whether or not you believe it will, the sun comes out. In the words of Maia Sharp, one of my favorite singers, “you can’t lose them all.” It just doesn’t always seem like it.

I’ve been trying, thus far unsuccessfully, to come up with a metaphor to describe the AS Navigator’s program. The thing is, I want to be as truthful as I absolutely can. I don’t like to exaggerate. And I try as hard as I possibly can not to lie, especially when it’s important. And  for the most part, I succeed. (Unless you count when you lie to yourself by saying “well, one more cookie won’t hurt…”)

I’ve been through a lot in my lifetime. I won’t go into details, because it tends to make people depressed and uncomfortable, but I’ve seen some of the worst of what the world has to offer. I’ve stared it in the face. And it is one of the few things that has truly, deeply frightened me.

Once you have done that, there is part of you that will never stop looking over your shoulder. Because it turns out, there is such a thing as evil, after all.

I thought it was just a word that people used to dehumanize their enemies and scare little children into being good. But trust me, it does exist. And I hope for your sake you never have to find out yourself.

But after all that, I’m still going. I’ve learned how to succeed in classes. I’ve learned to see more than just the bad in life. And I’ve had to work my butt off to get to where I am now.

So, I’m not going to lie to you and say I couldn’t live without the AS Navigator’s program. I could, because that’s just the kind of person I am. But what I’ve realized is that the program is like someone running beside you, holding an umbrella over your head when it rains. They don’t do the work for you. But they make it more bearable.

And when you spend your life working as hard as you can, never really getting the credit you deserve, that help can go a long way to making life better. It can make the task of getting up every day, knowing you’ll have to spend most of it way outside your comfort zone, a little bit easier. Because you know they’ve got your back.

TP : When I started the AS Navigators program, I already knew parts of what to expect. I knew I would have an advisor I would meet with, who would help me sort out a plan of action in regards to my schoolwork. I did not, however, expect the group meetings and assistance in getting information and help from my professors. These would all contribute to an elevation in my success here at BC.

My Navigation assistant is extremely helpful, and has given me a lot of advice as to what to do with my homework assignments. The information I get from my teachers via her is also very useful. The “To Do lists” provided by the assistant are also pretty useful, they serve as an efficient reminder to do my work and to do what my assistant and I discussed.

In short, the AS Navigators program is absolutely fantastic.

Shared by our Faculty:

I would like to share a conversation that I had with a Bellevue College student last night.

On his way to school on the bus that day, a baby started to cry loudly. When the baby couldn’t be comforted, another passenger became very upset, putting his hands over his ears and showing a great deal of anxiety. Our student went to the young man and tried to calm him. The young man, who was not a native English speaker, repeated a phrase that our student couldn’t understand. Eventually, the distraught rider pulled out a paper identifying the bearer as autistic. Our student explained calmly that he too was autistic and went on to share how he himself coped with upsetting events such as the loud noise of a crying baby. He made every effort to come to the other’s aid.

“Poor, guy. I hope he is ok,” concluded our student before launching into telling me about his dream to finish his program here so that he could become a graphic animator.

Two quarters ago, on the first day of classes when this same student could not find his classroom on his very first day of college, he was the one who needed help to deal with a difficult situation. Now, he is helping others to navigate life’s challenges. There is no doubt in my mind that the confidence that he has today is, in part, a result of the great support he is getting from the Autism Spectrum Navigator Program and his teachers at Bellevue College.

I don’t say it often enough, but in honor of this wonderful story, today I will remember to thank you to all at the ASNP and DRC for all you do for our community! 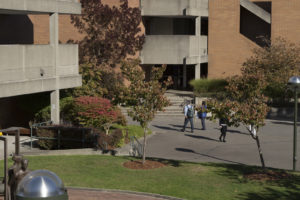