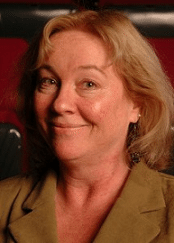 Acting, Intro, Dialect Coach Karen Jo has been working in the theatre both on and offstage for over 30 years. She earned her MFA (Master of Fine Arts) degree in Acting from University of Washington’s prestigious Professional Actor Training Program (PATP) and has appeared in over 60 productions locally and around the country. While acting is her first love, she also has extensive experience in behind-the-scenes work, including: directing, producing, designing, playwriting, publicity/business affairs, backstage crew and front-of-house management. Having served on the Board of Directors for two Seattle theatre companies, along with a stint as Co-Founder and an Artistic Director of Golden Fish Theatre – she is well-versed in what it takes to create live theatre. As an Acting Teacher and Dialect Coach, Karen Jo works as an Artist-In-The-Schools with kids from K-12, and with adult theatre companies in production who hire her for particular style and dialect coaching. She regularly leads Dialect Workshops and Adjudicates at the Washington State Thespian Conferences, and loves to work one-on-one as an Audition Coach with actors of all ages.