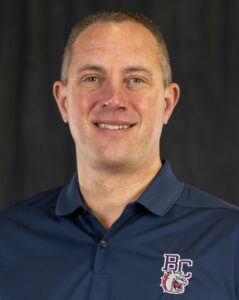 Entering his fifth year, Jeremy Eggers is the Director of Athletics. Eggers also is the Men’s Athletic Commissioner and also represents the NWAC as chair of the basketball sports committee. Eggers’ experience as a division I coach, successful two-year coach, and now administrator have given Eggers the background to not only enhance NWAC basketball but also the BC athletic department as a whole.

In his first year, Eggers saw 10 of 11 of his teams qualify for post-season play, with the tennis team capturing NWAC titles. Eggers has also been instrumental in the continuing development of facilities working cohesively with Executive Director of Campus Operations Will Tribble and Associate Vice President of Student Affairs and Dean of Student Life, Mike Kaptik. The soccer field had its official opening ceremony in the fall of 2017 while the softball field had its inauguration in spring of 2018. The soccer field has Astro Turf brand artificial turf with one of the softest surfaces in the Pacific Northwest, which is less stressful on the body resulting in a possible reduction of overuse injuries. The facility also has LED lighting; one of the only facilities in the NWAC with it.

The new softball field has now become one of the premier venues in the NWAC and is the top facility of the department as it sports new Astro Turf, LED lighting, sunken dugouts, a permanent restroom, new permanent storage, new batting cages, and a new inning-by-inning scoreboard. No other facility on campus has as many new features as the BC softball field.

Also recently completed are new locker rooms for all teams, a new 12,000 square foot weight room, an enlarged trainer’s room complete with a new ice bath as part of a multi-million dollar remodel of the college’s gymnasium. Each team whose home venue is on campus have their own locker room with wood lockers and private entry; a crown jewel amongst NWAC schools.

In his brief tenure as Athletic Director, Eggers has catapulted Bellevue from the bottom half to the upper echelon of college athletic facilities in the Pacific Northwest; a boon for incoming recruits.

Jeremy coached the Bellevue College men’s basketball team for 14 years and was an assistant athletic director for three years as well.

In addition to coaching the men’s team, he coached the Bellevue College women’s basketball team during the 2012-2014 seasons.  Along with his coaching and assistant AD duties, Jeremy had also worked at Bellevue College as a part-time instructor and gym manager.

In 2014, Jeremy led both the men and women’s team to North Region titles. It is believed to be the only time in NWAC history this has been done.

Prior to coming to Bellevue College, Jeremy spent one season as an assistant coach at Washington State University and several years serving as the Bellevue High School Head Basketball coach.

Born in Norwich, Connecticut, Jeremy received his Masters of Education from City University in 2004 and graduated from Pacific University in 1993.   Jeremy was a forward on Pacific University’s basketball team for two seasons. Prior to Pacific, Eggers attended Edmonds Community College and played for the legendary Keith Kingsbury and was a two-year member of the basketball team. During Eggers’ sophomore year, he led the Tritons to a North Region title with a 9-3 (league) / 22-8 (overall) record.

Jeremy and his wife, Joleen and have three daughters, Jaela, Jaecy, and Jaemie. Jaela is a freshman on the George Fox University basketball team while Jaecy is a sophomore on the Woodinville HS team.