NOTICE: The Athletics office is currently using online operations. Do you need to contact us? Staff are telecommuting and planning for upcoming seasons. If you have questions, please contact the Athletics Director, Jeremy Eggers, at jeremy.eggers@bellevuecollege.edu. 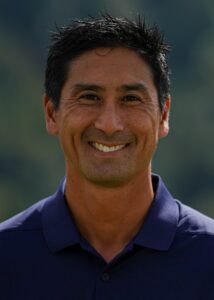 Coach Mark Yoshino enters his 27th year at Bellevue. Although he has been coaching baseball for that time period, he has a longer golfing background dating back 45 years. From his early swing lessons from the late Rick Acton, former head PGA professional at Sahalee Country Club at an early age, to the Washington Junior Golf Association (WJGA) State Championship, to his state championship-qualifying high school golf team, Yoshino brings decades of competitive golf experience to the BC women’s golf progam. He has “been there, done that” in regards to the collegiate golfer’s pursuit: lessons, tournaments, and unlimited rounds of golf thanks to the clubs’ encouragement of promoting junior golf.

A 1987 Interlake HS grad, Yoshino was a dual sport golfer and baseball player; his golf and baseball team both qualified for the WIAA state championships, but since both teams had championships in late May, the golf team had to forfeit their spot due to so many baseball players playing for the state title who were also on the golf team. His baseball team captured the class AAA state championship in addition to a final ranking of 16th in the nation by U.S.A. Today. He then played collegiately at Edmonds CC where Yoshino was named recipient of the Art Feiro Award (first and only Edmonds CC athlete to ever receive this honor), which is presented annually to the top scholar-athlete in the NWAC.

He obtained his bachelor’s degree in biomechanics (the scientific study of human movement) from Western Washington University. He was selected by the faculty at Western as the Outstanding Graduating Senior and Physical Education Major of the Year for graduating with a 4.0 G.P.A. Yoshino earned his master’s degree from Pacific Lutheran University in exercise science/athletic administration. He graduated with honors and a 3.9 G.P.A. Yoshino earned the Certified Strength and Conditioning Specialist title, which is recognized by university athletic and professional sport organizations as the credential to work with elite athletes at either level. His academic credentials in the athletic performance field coupled with playing experience provide Bellevue players a reputable and trustworthy coaching foundation for incoming recruits.

Yoshino’s academic and professional credentials in the health & fitness field have given him the opportunity to also work at the college as a full-time tenured faculty member in physical education and health. He is also the former chair of the NWAC Executive Board. Given his experience in the NWAC administration end, Yoshino is also the Assistant Athletic Director in charge of eligibility and compliance, and is the consultant for BC student-athletes on athletic-academic transferability for those moving on to the four-year levels. He is a recipient of the Dutch Triebwasser Award, given annually to the conference’s top administrator. He is the only person in the NWAC to win the conference’s top honor as a student-athlete (1989), coach (2007, 2009, 2011), and administrator (2013). His long tenure at BC coupled with his contributions earned him a spot on Bellevue’s “Exceptional 50”: a list of the 50 most influential people in campus history that was created during the college’s 50-year anniversary in 2017.

Although mostly known for his hard work in athletics, Yoshino is just as proud of his efforts ‘in the classroom’ – as a student, instructor, and administrator. To Yoshino, these accolades are the true reflection of his efforts at serving as a positive role model for the players at Bellevue. Recruits, their parents, and four-year coaches have frequently tabbed his varied contributions as the recipe for success, and perhaps the most reliable and stable force in a predominantly volatile coaching culture in the NWAC. With his coaching model, Yoshino has helped over 250 of his former athletes receive four-year college scholarships, including to over 45 NCAA division one universities.

While family duties now limit his total number of rounds to less than 10 per year, he was fortunate enough to have played 15 of the top 20 golf courses in the country in his earlier years. He lists Pasatiempo and Spyglass Hill on the west coast and Harbour Town, Pinehurst #2 and #8 as some of his favorites. Yoshino and his wife Lisa have two children Quinn (12) and Molly (10) and reside in Renton.

The BC Athletics HOF Banquet planned for October 2020 has been postponed until the Spring of 2021, where we will induct both the class of 2020 and 2021.

Both classes will be announced in Fall 2020. Nominations are still being accepted at this time.

BC Hall of Fame Nomination Form