Thomas Nguyen, a sophomore forward, was named to the North All-Region NWAC team today as released by the NWAC Sports Information Office. Nguyen ranked ninth overall in the entire NWAC is goals with 10 and had a shots on goal percentage of .512. Sebastian Bednik, Eluar Gutierrez, and Johan Gaytan were named Honorable Mention by ...more about Nguyen Lands All-Region Honors In Men’s Soccer

Bellevue College played their season finale today at home and tied Edmonds 2-2. In a first half which set the tone for what was expected to be a high-scoring, all-or--nothing season finale, both teams traded goals twice to set the 2-2 tie before halftime. Neither team could score in the second half although the 'dogs ...more about Bellevue Men’s Soccer Ties Edmonds

Bellevue College soccer tied host Peninsula today 1-1 in a defensive battle that featured only six total shots on goal in a relatively quiet game. Both teams scored in the first half as BC's Keegan Storkson scored midway through the half on an assist by Johan Gaytan. Peninsula would answer back at 42:01 as both ...more about Men’s Soccer Ties Peninsula

Bellevue College men's soccer defeated visiting Shoreline today 2-0. Although the score appeared to be competitive, BC dominated as the Bulldogs fired off 27 shots as compared to the four for Shoreline. BC had nine of those shots on goal as they had complete control of the ball for the game. Nicola Luongo benefited from ...more about Men’s Soccer Takes Down Shoreline

Bellevue College men's soccer tied South Puget Sound today 2-2 in a rain-soaked contest held at Regional Athletic Complex in Lacey. In their second game in the last 24 hours, the 'dogs held a 2-1 lead deep into the game but grew fatigued as South Puget Sound managed to tie it up at the 73:44 ...more about Men’s Soccer Ties South Puget Sound

Bellevue College men's soccer lost 4-2 today at the BC pitch in a make up game due to poor air quality in the Puget Sound region earlier this week. The Bulldogs, in a must-win situation in order to make the playoffs, dug themselves into a hole early as Everett jumped up 3-1 in the first ...more about Everett Tops Bellevue 4-2

Soccer Games With Everett Postponed Due To Air Quality

Bellevue College soccer, who had both their men's and women's games postponed Saturday due to unsafe air quality, have had their games rescheduled for Monday October 24. The women will play at 2:00 PM before the men play at 4:15 PM. Both will be as scheduled at Bellevue College. 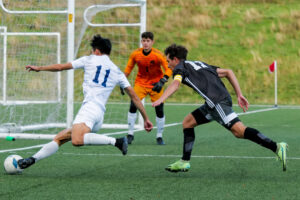 Bellevue College men's soccer lost 5-1 today at Skagit Valley. In a game that statistically was evenly-played but was not reflected on the scoreboard, the 'dogs had 10 shots as compared to Skagit's 11. Unfortunately, five of the seven Cardinal shots on goal found the back of the net for the lopsided win. Skagit jumped ...more about Skagit Valley Tops Men’s Soccer

In a game that was initially an even battle, visiting fourth-ranked Peninsula topped Bellevue 3-1. The Bulldogs and Peninsula competed evenly in the first half in a defensive battle that saw only five total shots get off between the two teams. Bryan De La Rosa found net late in the first half to break the ...more about Peninsula Tops Men’s Soccer