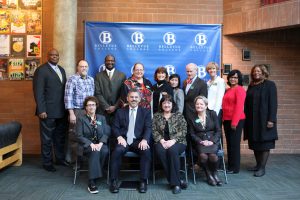 The nine justices of the Washington State Supreme Court visited Bellevue College to engage with the community, and to hear oral arguments on three cases. Since 1985, the Court has heard cases “on the road” several times a year in an outreach effort allowing citizens to see the court in action in their local communities.

Prior to the visit, Chief Justice Barbara Madsen said, “The Supreme Court’s Travelling Court program is a chance for the justices to bring the court to the people. We appreciate the invitation from Bellevue College to visit its campus. In addition to students, we encourage anyone interested in learning more about the judicial branch of government to see the workings of the highest court up close and personal.”

On Monday, Nov. 14, the justices sat in on classes, took a campus tour, had lunch with Bellevue College students and held an open forum to answer general questions from the public. On Tuesday, Nov. 15 they heard oral arguments on three cases.

Roughly 900 attended the first case heard by the Court regarding Arlene’s Flowers, filling the Carlson Theater to capacity, the N201 overflow room to capacity, with additional spaces opened up in the cafeteria and library to accommodate the crowd. All three cases were live-streamed on the BC website, and the nationwide traffic was so large that it caused the Court’s own internet feed to crash at one point. The case received state and national attention.