The Eastside owes much to Bellevue College’s founding president.

Merle Landerholm’s commitment to education, youth and families has left an enduring legacy that continues to act as a catalyst for positive change. A man who never wanted to be anything but a good teacher found himself a college president at the age of 38, appointed to the post by the Bellevue School District in January 1966.

From the college’s very beginning, Landerholm pushed for accessibility and diversity. In his inaugural address, Landerholm said: “I am convinced that a full redress of the grievances of minority America must occur. What is called for is a total commitment to finding solutions and not fretting over our shortcomings or defining them away as if they were not real. It is a challenge of a new frontier—a challenge which can be met if we are not weak in spirit. It is a challenge calling for a renewal in human values. For all of us need to be reminded not to be so transfixed by the brilliant sight of the other side of the moon that we are blind to the other side of the street.”

His vision set a course to build one of the greatest educational institutions in the state. Regrettably, Landerholm did not live to see the phenomenal growth and hear the accolades that have followed the college throughout the years since his sudden passing in 1976, just 10 years after the college opened.

In a letter to the editor of the Bellevue Reporter on April 27, 2009, Don Riggs, of Bellevue, wrote, “the man probably more responsible than any of the others involved in its success, was its first president, Merle Landerholm.” Alluding to its first classes held at Newport High School, Riggs noted that Landerholm “was the main force in taking that ‘night school’ and building it into a major, if well-hidden asset. … His sudden death  at a relatively young age was a blow to education and to those of us who knew and respected him.”

Landerholm was a high achiever in college and throughout his professional life. He graduated among the top 10 at Washington State University (WSU) in 1951, received his master’s degree in education administration at WSU in 1955, and a doctorate from the Columbia University Teachers College in 1960. He joined the Bellevue School District in 1951 as a high school history and civics teacher,  served as a counselor, and later became vice principal of Bellevue Junior High School and principal of Highland Junior High. He was director of district personnel before being named administrative planning officer for Bellevue Community College.

Landerholm believed that community colleges play a key role in a democratic society, said his son Eric Landerholm. “He wanted to contribute to the mission of self- advancement, where society was not permanently stratified by class. Your fate could be determined by devotion to learning as a way of training your mind and developing skills to allow you to compete with those born into elite families.” Those beliefs and values  formed the foundation of Bellevue College and remain among the college’s guiding principles today.

Landerholm’s nephew, Melvin Woodworth, said: “What I remember most about ‘Uncle Bub’ as he was developing Bellevue Community College was his intensity in ensuring that the school would be a model of racial diversity, accessibility to persons of diverse ability and technological progressiveness. … He never wanted it to be just another college. He wanted it to be an extraordinary school, advancing higher education through both exceptional pedagogy and practice.”

Accessibility was of such importance to Landerholm, Woodworth noted, “When the school was under construction I joined him in a walk around campus assessing its accessibility. … When it was essentially finished he repeated his tour in a wheelchair to ensure that those with mobility challenges would be able to negotiate the doors and hallways.”

According to Woodworth, “Prior to final design of the school, he traveled widely to learn about the promise of those new ‘computer things’ to provide the very best in computer technology for both administration and student use.”

One of Landerholm’s first hires was Boyd Bolvin, Ph.D. Bolvin was in charge of “learning resources,” which included the library and technology that existed at that time — the precursor to today’s Information Technology Services department. Soon after, the college launched Chester, a dial-in phone switch machine. Users with touch- tone phones could call Chester and listen to preprogrammed lessons, lectures or stereo music 24 hours a day, seven days a week.

In addition to his groundbreaking work at Bellevue College, Landerholm was a founding member of Youth Eastside Services (YES) with Phil Nudelman. YES serves as a lifeline for youth and families coping with challenges such as emotional distress, substance abuse and violence. YES, which opened its doors in 1968, was run out of a small house in Bellevue and served a small number of youths. It now has four offices throughout the Eastside in Bellevue, Kirkland, Redmond and Sammamish and touched nearly 70,000 lives in 2018 alone. In November a commemorative award was presented to Ann Landerholm-Burke, Landerholm’s daughter, during the YES 50th anniversary celebration.

Landerholm-Burke said: “He died when I was 13, and as an adult I am still discovering the magnitude of his accomplishments and positive impact he had on the community in his short lifetime. I am so proud of my dad.”

Why is it called Landerholm Circle? 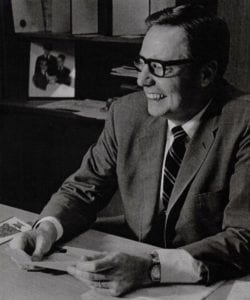 The road from 148th Avenue that continues until forming a circle around the flagpole at the main entrance was named Landerholm Circle by college trustees in 1977 to memorialize Merle Landerholm, who directed the early planning of the college and was appointed its founding president when it was officially established in 1966.

A circle is a perfect metaphor for Landerholm’s legacy, as it is continuous and never broken. There is also a plaque at the base of the flagpole that honors him, and an endowed scholarship in his name has been awarded to a BC student each year for many years.